Denim suppliers, brands and retailers can breathe a sigh of relief, at least in Europe. Between 2007 and 2013, jeans imports experienced an “exceptional rate of growth” of 5.3 percent. This is what the recent study “European imports of denim in 2013” conducted by Jean-François Limantour

and published by Texworld found out. 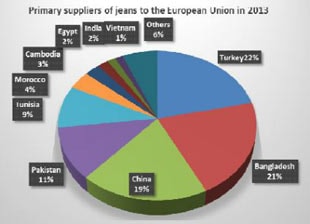 The only exception to the solid growth rate of jeans imports was the year 2012 due to the economic crisis in Europe. In comparison, total EU clothing imports grew by 2.2 percent annually during the same six-year period. Thus, the year 2013 marks a healthy recovery of EU denim imports with a growth of 4.4 percent in value and 8.6 percent in volume.

The Top 10 suppliers to the EU by country were Turkey, Bangladesh and China in the top three slots (with 22, 21 and 19 percent, respectively), followed by Pakistan, Tunisia, Morocco, Cambodia, Egypt, India and Vietnam (ranging from 11 to 1 percent). That means, three countries - Turkey, Bangladesh and China – supply almost two thirds (62 percent) of jeans imports in terms of value and 69 percent in terms of pairs of jeans.

Though China had to give up its top slot, which it still occupied in 2012, to Turkey and Bangladesh, it still leads in terms of volume, with 142 million pairs of jeans exported to the EU in 2013. In Asia, countries like Vietnam and Cambodia are on their way to rivalling bigger suppliers like Pakistan and India.

In terms of market size, as the largest importer in terms of value and volume (114 million pairs of jeans imported in 2013) and market with the strongest growth rate (+7.2 percent annually since 2005), Germany is the most attractive European import market for jeans.

In the rest of Europe, France and Italy are important jeans markets despite relatively weak annual growth rates since 2005 (1.9 percent and 1.8 percent, respectively), representing each around one third of the value of Germany’s market. Portugal, the Netherlands, Denmark, the Czech Republic and Sweden are smaller European markets with healthy growth rates.